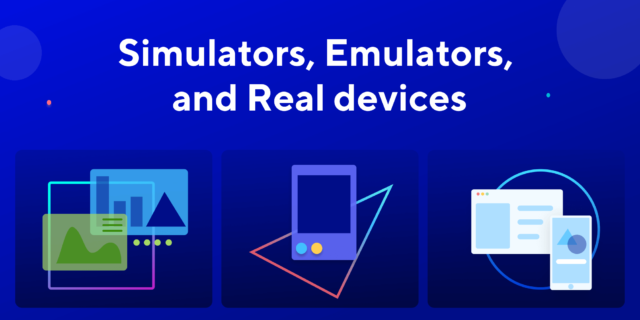 Developers worldwide have been using emulators and simulators for years to test their products. Does using a simulator or device emulator online in the current iOS and Android ecosystem, which is much different from that of a few years ago, still make sense?

Let’s first clarify the distinction between an emulator and a simulator. Although these phrases are frequently used interchangeably, their precise definitions matter a great deal in software development.

According to research, 88% of consumers would stop using an app if it had even one issue. Hence, it is essential to test your app on the right platform properly.

Despite the similarities in their functions, emulators and simulators vary fundamentally. There is no need to use a simulator to test the actual hardware of a device because it just mimics its internal functioning. However, testers that do not need to test application performance properly under optimal circumstances will not mind the trade-off.

Emulators, on the other hand, recreate the complete experience of gadgets. This implies they can reflect the totality of the genuine device’s functionality. In this regard, simulators fall short of emulators. Nevertheless, simulators can outperform emulators in some situations.

Simulators are more than enough for simple application testing if you are a tester. Simulations can be used to test simple features like calculation, which do not require complicated testing environments, such as a sandbox or a virtual machine.

In a similar situation, an emulator will be unnecessary. Emulators are best suited for applications that require access to a wide range of hardware and software options.

Snapchat, for example, uses complex features, such as geolocation, audio systems, cameras, and other memory-intensive elements, to enhance the user experience. Such applications can run smoothly on emulators since they provide a complete environment for them.

On the other hand, a simulator lacks hardware capabilities; thus, it cannot demonstrate how sophisticated features like geo-location, sound systems, cameras, and so on truly operate on the device. Snapchat’s core functionalities won’t be clearly shown, making it more challenging to track down and fix any technological issues.

It is also simpler to debug emulators. Emulators highlight errors in a program. This is because the vendors themselves develop the emulators. Google provides an official Android SDK for developers.

Machine assembly language is used to create emulators, whereas high-level programming languages are used to create simulators. But emulators can’t keep up with simulators in terms of speed, which is why they’re often considered inferior.

There were about 15 billion mobile devices active worldwide in 2021, up from 14 billion in 2020. No matter how popular emulators get, genuine device testing will not be phased out anytime soon. There are still many flaws with emulators, even though they are pretty similar to the simulating devices.

Beta testers must get a sense of what the final product will be like for the general public. This is possible only on physical devices. When it comes to mobile testing, there are several advantages to using genuine devices:

However, you may still get a good picture of what an actual gadget might seem like if you use an emulator. The performance of an app can be most adequately measured on a real device because of various external factors.

Why You Should Hire A Steam Gront Car Cleaner To Clean Your Car?

Top Breweries to Try Out in Milwaukee