Xiaomi electric scooters are among the most popular on the market, despite the fact that most purchasers have no idea how to pronounce the brand’s name. The Mi Scooter Pro 2 is a follow-up to the original, which was known as the M365 Pro when we reviewed it but is now known as the Mi Electric Scooter Pro. The Pro suffix indicates that it has a stronger engine and a larger battery capacity than the Mi Electric Scooter. It also features a more informative display and, thanks to the increased oomph, can climb steeper slopes. It does, of course, weigh more, and at almost 14kg, it’s about as hefty as a light electric bike.

There aren’t many variations between the Xiaomi Electric Scooter Pro and the Pro 2 when it comes to specs: the highest speed is the same at 15.5mph (25km/h), the wheels are the same at 8.5in, the range is the same at 28 miles (45km), and the dimensions are the same. The front light is brighter at 2W (compared to 1W) for the keen-eyed, but that’s about it. The remaining changes aren’t included on the standard sheet, but they include a revised rear mudguard with room for a registration plate (which is required in some countries, such as Germany) and more reflective stickers. 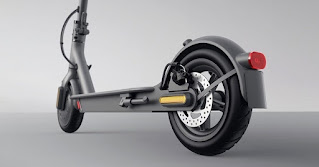 All of this means that the £100 price increase from £499 a year ago to £599 currently has little rationale, and none of them are compelling reasons to upgrade if you already possess a Mi Scooter Pro. However, those are RRPs, and if you shop around online, you may buy the Pro 2 for less. The scooter was loaned to us for this review and is available for £539 through Box.co.uk. If you don’t already possess a Xiaomi Electric Scooter Pro, the issue is whether the Mi Scooter Pro 2 is a smart investment.

Allowing for the increased price, the scooter itself has plenty of power for rapidly getting up to speed and tackling those hills. Fortunately, I live in a mountainous part of London, and the Mi Scooter Pro 2 is more than capable of carrying me up those hills. Most of them are difficult for lower-powered vehicles, with speeds slowing to a crawl. The only way to go up hills in certain situations is to help the motor with physical scooting, although this isn’t necessary with the Pro 2.

The tiny wheels don’t absorb any bumps, and there’s no suspension, so it’s best on flat terrain like any other scooter. In the UK, the Pro may now only be used on private land, but the legislation is likely to change in the next 18 months to keep up with the rest of the globe. The build quality is excellent, and the Mi Home app’s Bluetooth connection is solid. Xiaomi’s app may be used to control a variety of Xiaomi electric scooter, but after you’ve created an account and added the Mi Electric Scooter Pro 2, it can act as if it was made just for the scooter.